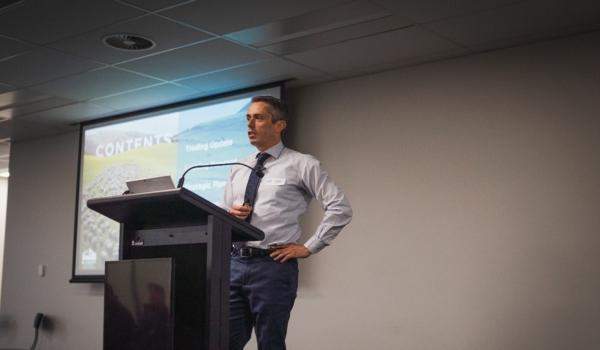 Chief Executive Todd Grave unveiled the brand to shareholders with a soft launch at this year’s AGM on August 8 at Bill Richardson Transport World in Invercargill.

“The company name will remain as Blue Sky Meats but going forward, the brand we present to the outside world will be Blue Sky Pastures,” he said.

As Blue Sky Pastures, the refreshed brand represents a new chapter for the company.

Grave said consumer research showed the company needed to refresh its brand, transitioning from an industrially focused company name talking about their operations, to a more consumer-driven brand, which talks about who the company is, where it comes from and its values.

“We’ve made a lot of headway in recent years and while we’ve still got work to do, we felt now was the appropriate time to launch a brand refresh which reflects our new horizons.”

The new brand is reflective of Blue Sky Meats being in the business of creating authentic eating experiences for people who care about where the produce comes from, Grave said.

Meanwhile, at the company’s AGM, shareholders saw the release of the unaudited Q1 NPBT results (April to June) of just over $3 million.

While profit was up on budget but down slightly on Q1 compared to the previous year, Grave said this was because of May volumes being slightly down.

“Importantly, our profit per unit is in line with last year, as our Strategic Plan continues to deliver,” he said.

This year is set to be busy, with good livestock flow projected, ongoing strong prices in the market and Blue Sky’s production team pushing hard on yields per carcass.

The company is set to process roughly the same number of bobby calves as last year and within the next two weeks, the Morton Mains plant will be at full single-shift capacity.

Lamb contacts for the August to October period are up strongly on last year, a result of the Procurement Team’s efforts to build high-value relationships with suppliers.

However, co-products are under some commodity price pressure. Pelts, blood and Blue Sky’s strong returns on rendering are all projected to come off somewhat in the months ahead.

Also introduced to shareholders at the AGM was the company’s new premium sub-brand, Melrose Station.

Melrose Station lamb is grass-fed, antibiotic, hormone and GMO-free, sourced from a single farm in Southland. The sub-brand is positioned on purity, provenance and craftsmanship. It provides foodservice and consumers transparency in supply chain (back to a single farm).

The brand gives an understanding of the geographic location of the farm, and its farm management, animal welfare and environmental practices. This is the first step in a project which will see Blue Sky Meats providing farm-specific traceability.

Melrose Station lamb products have been available exclusively in a small number of Southland restaurants since early this year. They will soon be listed in Walmart China’s top 25 outlets.

It is with sadness Blue Sky Meats announces the retirement of one of its long-standing directors, Peter Carnahan.

Peter’s affiliation with the company began in 1986 where he was appointed Company Secretary. In 1996, he was made a director of Blue Sky Meats and the company is very grateful for the expertise and guidance he has brought to the table throughout the years.

Blue Sky wishes him the best for his retirement. Chairman Scott O’Donnell said they would now review options as part of a refresh of the board’s composition.

In fiscal year 2018, Blue Sky Meats embarked upon an ambitious plan to upgrade plant infrastructure. The bulk of this plan was delivered during its recent five-week off-season in July.

The investments made as part of this plan will:

• bring the company up to new, strict health, safety and environmental compliance

• address ageing plant and equipment which has becoming increasingly costly, inefficient and constraining

• create an operational platform to better drive the Strategic Plan.

Grave said the largest investment is the new $3.7M wastewater treatment plant, which is a “non-negotiable” investment in the company’s future.

“This new plant will move us to a system which processes and treats the effluent to rigorous standards,” he said.

“It also provides for additional bolt-on processes to future-proof us over the longer-term, should these be required.”

A new ammonia refrigeration plant will replace the existing plant and uses a more environmentally friendly and efficient ammonia gas.

Blue Sky Meats is also undertaking a raft of health and safety-related investments to improve the safety of interactions between its people and their physical working environment.

These include a new roading layout to reduce human-vehicle interactions; the replacement of bandsaws to new hand-sensing auto-stop saws, and replacement of high-risk slaughter-board hock-choppers; and ongoing machine guarding program across the entire plant.

“None of these investments would be possible without the last two years’ solid financial performance,” Grave said.

“The efforts of our people have gotten us to this point, and they rightly will be the beneficiaries of a safer and more efficient workplace.”